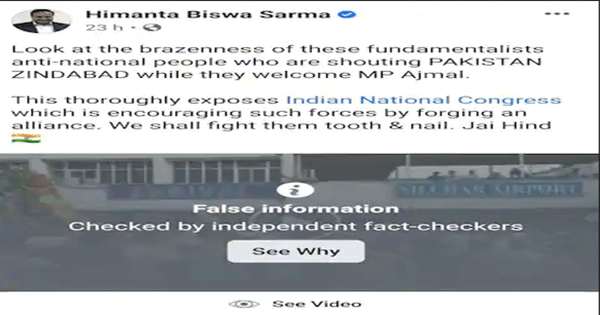 Sharing fake information on Facebook, Himanta Biswa Sharma comes under the watchful eye of Facebook. On Friday, Some of the supporting members of Badruddin Ajmal allegedly sounded ‘Pakistan Zindabad ‘after Ajmal reached Silchar airport. Even the video goes viral on social media. But without knowing the authenticity of the video, Minister Himanta Biswa Sarma posted the video on his Facebook wall and accused the sounded people of being “Anti National”. He also accused the Congress Party for this video as the alliance between Congress and Ajmal’s Party is going to happen.

The news was also circulated by the leading local and national media after Himanta Biswa Sharma posted the video on social media. Several political leaders also reacted to the issue. Later several independent organizations including the national media ‘alt news’ had also checked the fact of the viral video. They claimed that the audio, however, is actually heard saying ‘Aziz Khan Zindabad’ by Ajmal’s supporters. It was not said ‘Pakistan Zindabad’. The company has asked everyone to listen to the video by using headphones on ears. And then Facebook flagged the post of Himanta Biswa Sharma as ‘fake information’.