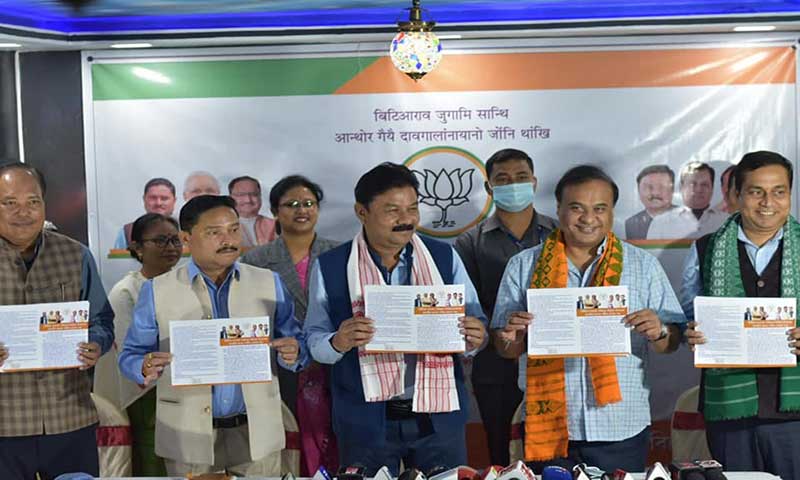 BJP, Assam has released the BTC election Manifesto 2020 for the elections to be held on December 7 and 10, 2020. The election manifesto was released at Tibeni Bhavan in Kokrajhar in the presence of Assam BJP President Ranjit Das, Finance Minister Himanta Biswa Sharma, Dilip Saikia, and Newly Joined Ex BPF member Biswajit Daimary.

On the release ceremony of the BTC Election Manifesto, minister Himantha said the party has focused on mainly 50 issues in the BTC region. “Corruption and commission raj will be stopped if BJP comes to power in BTC. Our Party will be abiding by the BTC Accord. If any village on the border wants to enter BTC, we will also take a decision on that”, said Minister Sharma while speaking to reporters.

The Manifesto also ensured that the party would set up colleges in every subdivision. The people of BTC are also are going to have benefited from Arunodoi, Swayam, Arundhati schemes once BJP comes to power. A sum of Rs 50,000 will be provided to all self-helped groups and some other additional funds will be released from the Centre for the development work of BTC.

After the BJP came to power, The Bodo University in Udalguri, the Medical College in Tamulpur, and 40 stadiums in the BTC area are promised to be built. The Minister also mentioned that high schools will also be set up at the tea gardens in the BTC area

BPF to contest election in 38 constituencies against BJP in 2021