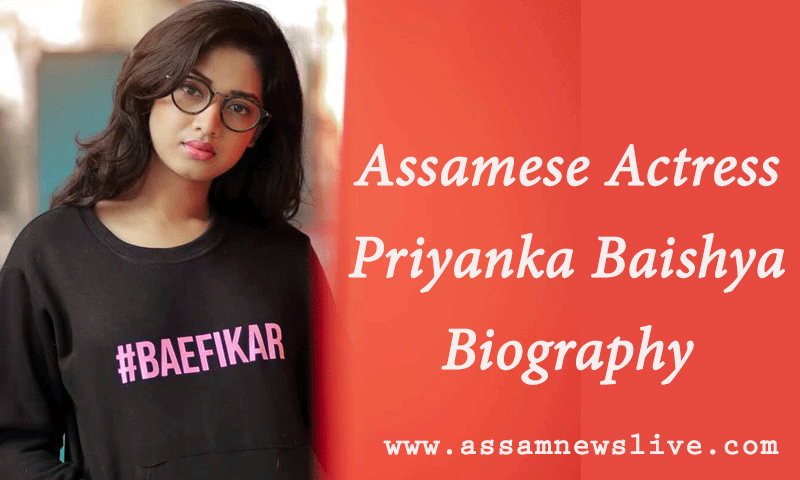 Priyanka Baishya is a well-known Assamese actress from Assam. She is also known as Pri. She started her career as a model in 2015 and now become a well-known actress in the Assamese film industry. She is well known for many Assamese music videos like Disco Bhonti, Taxi Gari, Deha Tumaar Lahoti, etc. Priyanka is also known as Pri on social media and she loves the name when someone calls her ‘Pri’.

Priyanka Baishya was born in North Guwahati, Assam. Her date of birth is 9th February. Priyanka Baishya alias Pri is an Assamese Film Actress & Model.  She started her career in modeling and later she became a popular actress. Now she has also started a vlogging youtube channel also – Direct Priyanka.

Priyanka Baishya is a young and energetic Assamese Actress. She was awarded as Miss Photogenic at Sunsilk Mega Miss Northeast ’15 Most beautiful face and Miss photogenic at Miss Anuradha in 2015. She was also awarded as best style icon (North East) in 2018.

Just after starting her modeling career, she gets her first inspiration from Pankaj Ingti to try the Assamese acting industry. Her first debut as an actress was a music video song in 2015. After that, she got a chance to act in an Assamese serial ‘Girls hostel’ with Tridip Lahon in Rang Assamese Channel.  Some of the famous video album songs of Priyanka Baishya are Mao kande, Taxi Gari, Koli Krishna, Disco Vonti, O Najitora, etc with controversial video album song Pitiki Pitiki.

She is originally from north Guwahati and now currently staying in Punjabari, Guwahati, Assam. She is among a very few actresses who starts her first modeling career and acting career in the same year 2015.

Priyanka Baishya comes from a business background family. She was born to father Mr. Tilak Bishaya and mother Late Rinku Bishaya into a Hindu family.