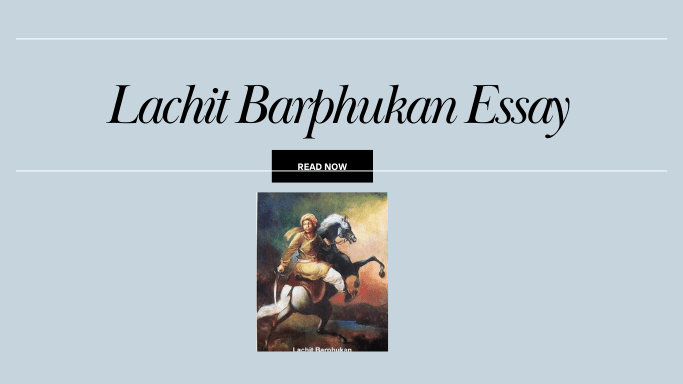 A statue of Bir Lachit Borphukan was installed at Jalukbari in Guwahati on 24th Nov 2022. Since then, November 24 has been celebrated as “Lachit Diwas” officially and non-officially every year. Lachit-Diwas is celebrated across Assam to commemorate the bravery of Lachit Phukan and the victory of the Ahom army in the Battle of Sharaighat. Assam Govt has launched an essay competition on the occasion of Lachit Diwas 2022. We have provided two sample essays for the Assam govt essay competition on Lachit borphukan.

Being from a royal family, Lachit Bophukan received both military and civilian education at an early age of his life. Lachit Borphukan for the strength of his bravery, honesty, conscientiousness, and fairness got the title of Head Commande. In 1667,  The King of Amber named Ramsingh reached Assam with ten thousand soldiers. On receiving this news, Lachit Borphukan got ready to defeat the Mughals. On the battlefield, the forts around Guwahati were built to stop the movement of enemy forces. The responsibility of repairing the fort was on his maternal uncle. But Lachit could not bear to see the negligence of his uncle’s work in building the fort and Lachit beheaded his own uncle. Since then, the fort has come to be known as Momai Kata Gar.

The decisive battle was fought at Saraighat on the river of Brahmaputra in the early part of 1671. Lachit Barphukan was not feeling well at the time, and Ram Singha, the chief commandant of the Mughals wanted to take advantage of his illness. Ram Singha had nearly succeeded in breaking through the defense system of the Ahoms. But in spite of having a high fever in his body, Lachit got himself carried to his battle boat and inspired such courage among his soldiers that leads to a tight fight against Ram Singha’s forces. Ram Singha had to accept defeat and left Assam on 5 April 1671.

Lachit Borphukan died soon after winning the Battle of Saraighat. King Udayaditya Singha later built “Lachit Maidam” in a place which is16 km away from Jorhat in 1672.