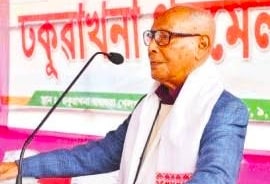 Eminent Assamese litterateur Homen Borgohain passes away today early in the morning at GNRC hospital of Guwahati. He was 89 at the time of death. He wished to live upto 100 years but recently he got tested COVID19 positive.

After going through treatment, the eminent literature has also recovered from COVID19 recently. But As per reports, he died of cardiac arrest today morning at around 6.58am.

Homen Borgohain was born on December 7, 1932 . His birthplace is Dhakuakhana in Lakhimpur district of Assam, India. Homen Borgohain married to the writer Nirupoma Borgohain , But they separated after 19 years of being in relationship. He was the former president of the Assam Sahitya Sabha as well as an Ex Assam Civil Service (ACS) officer.